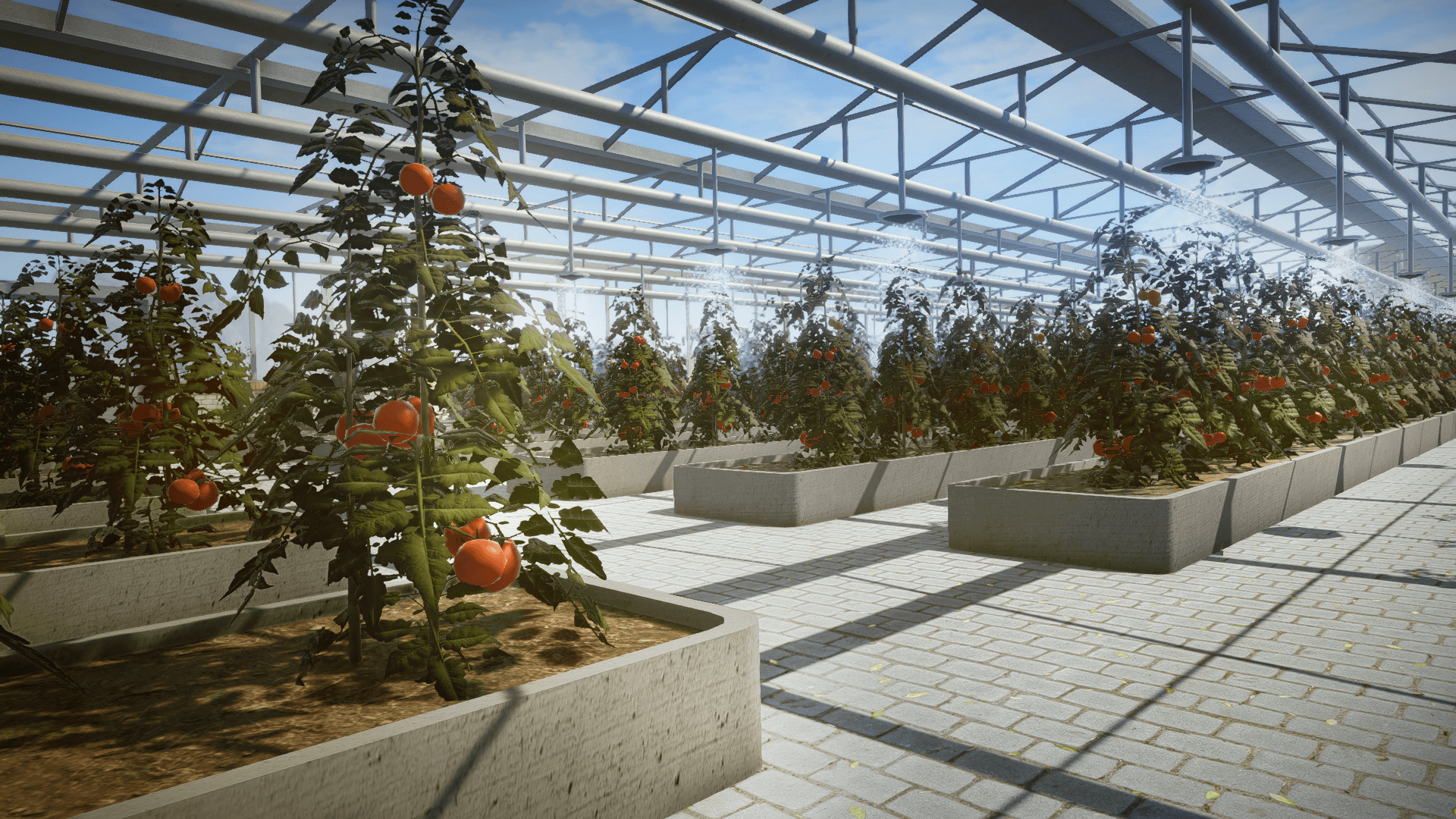 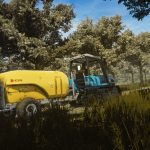 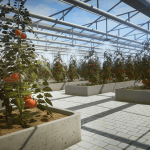 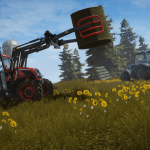 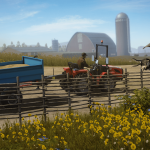 No. We did not make this game. Pure PlayStation has never made a video game. The fact this farming simulator shares a bit of our name is nothing more than a coincidence. Are we looking at suing? No. Not yet. Only if our articles start appearing in-game. Actually… That’d be pretty awesome. Enough of my pondering, let’s get on with the review.

By now you’ve probably heard of the farming simulation genre. If you haven’t, don’t worry, it’s a pretty tight niche. I mean, c’mon, who would really want to play a game where the goal is to work? Me! Me! A thousand times me! I love work! No, really, I do. And when it’s work that I can turn off at a moment’s notice, I like it even more.

Pure Farming 2018 is the new kid on the farming block. There are others, sure, and some of them are pretty decent. Others are pretty shite. Pure Farming falls into the former category, thankfully. Nothing worse than a bad simulation. My fellow sim-nerds will understand. The rest of you just aren’t there yet. You will be, though, once I’ve swayed you with this review. 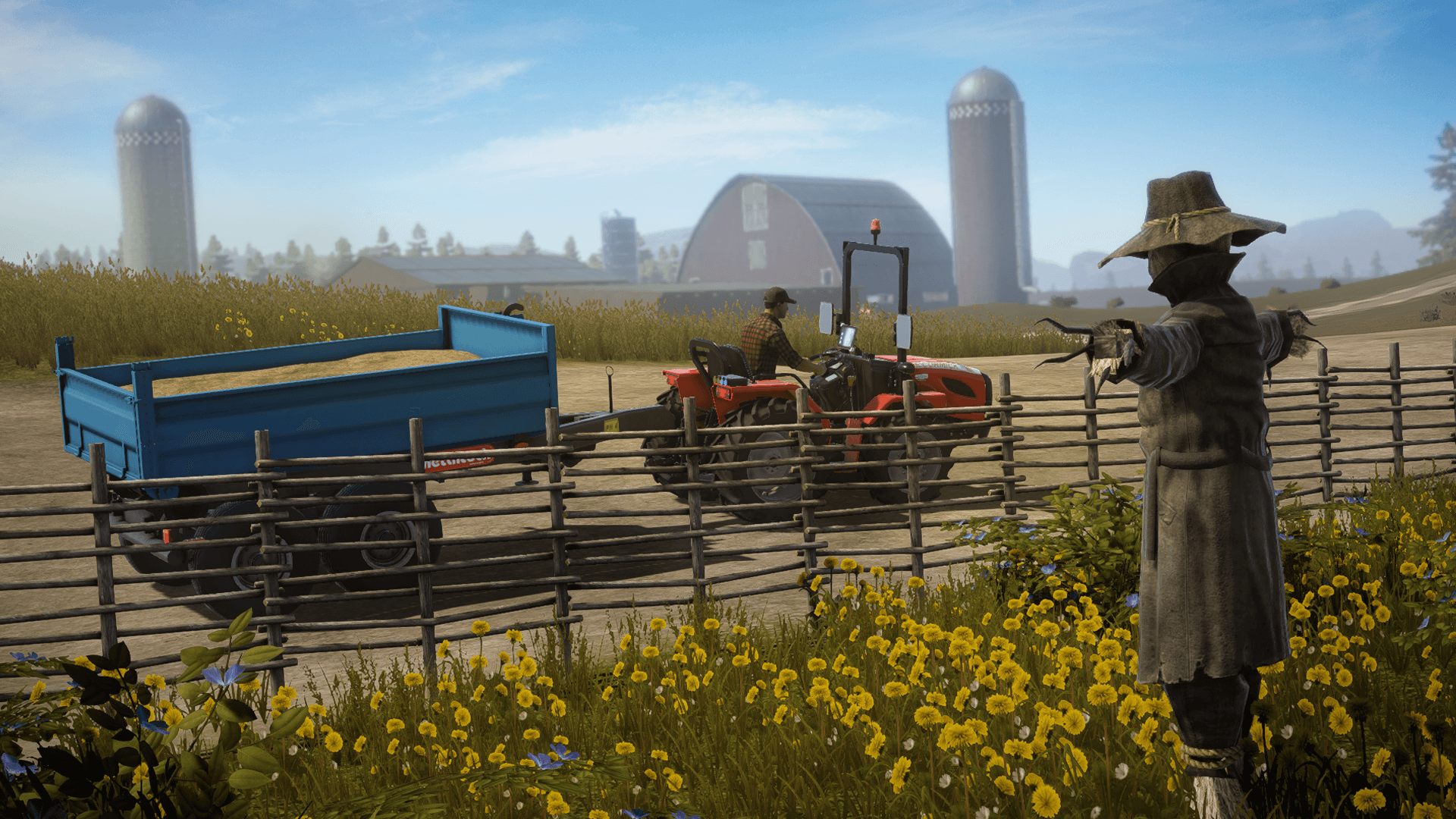 I’ve only recently come to enjoy the simple pleasures of simulation games. I’ve always been into my Championship Manager/Football Manager games, but simulating something as mundane as farming is relatively new to me. It’s only in the past couple of years that I’ve learned to appreciate the chilled nature of these games.

Pure Farming is a pretty chilled game, if you want it to be. There’s a plethora of options to suit every play style. If you’re new to genre, you’ll want to start with the game’s campaign. In this mode you’ll inherit your granddaddy’s farm after he kicked the milking bucket. You’ll not only inherit the farm, buildings, and the equipment, but also the debt. Yep. Grandaddy has screwed you over. But it’s all good, you’ve got the helping hand of the bank who want nothing more than for you to succeed. Because if you succeed, you pay off your debts.

This game mode is where you’ll learn the basics. You’ll learn how to drive a tractor, plough fields, and most importantly, earn some cash. Expect your hand to be held pretty much every step of the way here. That’s not a bad thing, mind you, as even I, a seasoned Farming Simulator player, needed a bit of help navigating the game’s menus, world, and all the rest of it.

If you’re dipping your toes into the world of farming simulation for the first time with Pure Farming 2018, you’ll definitely want to go through the campaign. It serves as a decent tutorial where you’ll level up, expand your farm, buy new equipment, and pay off some debts. If only real life was so fun…

For those looking for the ultimate simulation, there’s the free farming mode. Here you’ll set the conditions and the game world will be open to you from the word go. I’ve not spent too much time here, to be honest, but in the few short hours that I have spent growing Harding Farms, I’ve enjoyed it immensely. 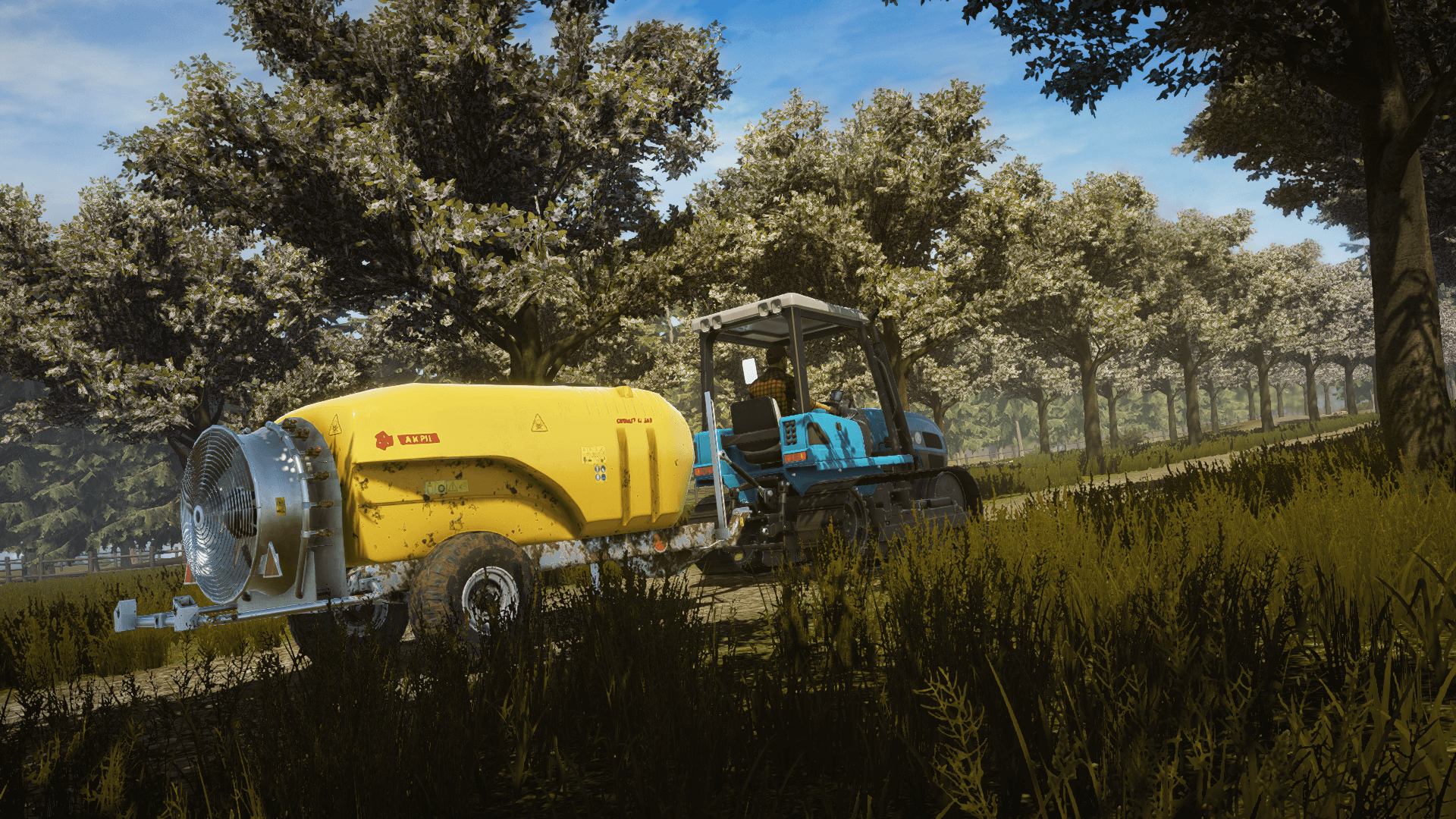 Watching your business grow as you expand your farm is weirdly satisfying. It’s challenging, too, as you’ll have to deal with fluctuating prices, shortfalls on stock, and the general wear and tear of your farming equipment. A lesson that I learned early on is to carry out inspections on my vehicles regularly. If you don’t then you’ll find your tractors, harvesters, and all the rest running slower and burning through fuel faster than they normally would.

What I really like about Pure Farming 2018 is the way the menus are set up. You’ve got your in-game tablet computer where you’ll be able to order whatever you need. Run out of fuel in the middle of an extreme ploughing session? Crack open your tablet and order some fuel and have it delivered instantly. There is a drawback to ordering goods through the tablet, though – costs are anywhere between 20% and 50% higher than fetching the stuff yourself. It doesn’t make sense of course, given that in this day and age it’s cheaper to order everything online rather than walking into a store, but it works. It gives you a good reason to keep an eye on maintenance and fuel levels. Yet I still find myself ordering fuel via the tablet every single damn time…

There’s also the challenges mode. Here you’ll be given different tasks with different criteria for success. You could be growing cherries in Japan, or dealing with a drought while trying to harvest a bumper crop of tomatoes. It’s not my cup of tea, personally, as failure is always an option. I prefer to just chill out, farm my land, raise some animals, and make some cash. But for those looking for a challenge to spice things up in the world of extreme farming, it does just fine. 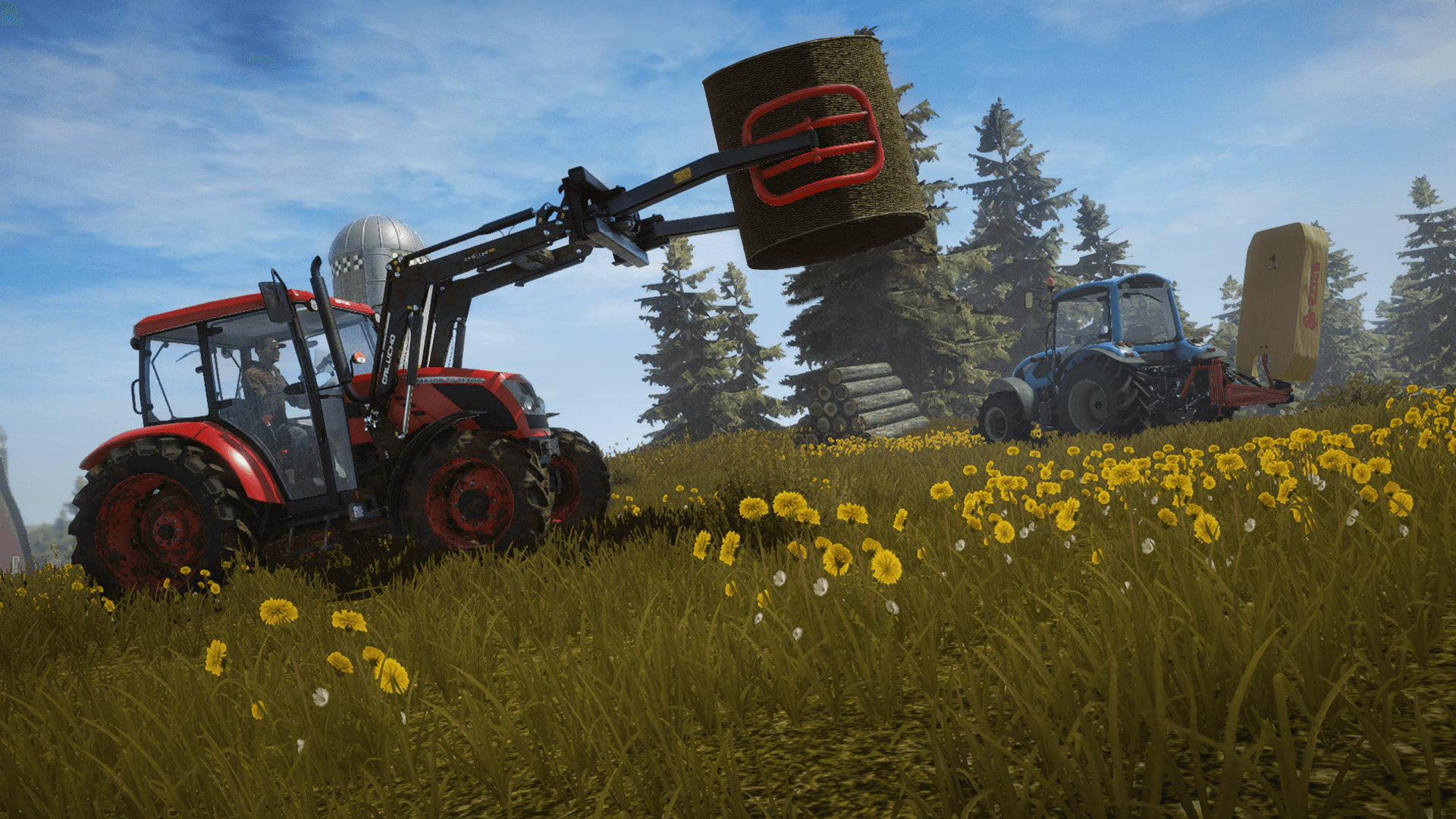 On a technical level, Pure Farming 2018 is… not bad. It does suffer from “Euro Jank” that is typical in these European-made simulators. It’s not terrible by any means, but it’s not the gleaming show of perfection that I so desire from my farming sims. Frame rates are wobbly, though that doesn’t hinder the fun; snap reactions are not needed, especially when you’re driving a tractor carrying a ton of wheat as you’ll only be going 14mph at most.

Graphically we’re looking at something that could have probably been done on the last-gen systems. Everything looks fine and is perfectly serviceable, but if you look a little deeper you’ll find some flaws. For example, the game’s draw distance is pretty poor and things in the background appear really blurry even if they’re only a few hundred in-game yards away. Then there’s the lack of real shadows and reflections, but again, this is me just nit-picking. And, to be fair, nobody is running out to buy these kind of games to show off the graphical power of their PS4 Pro…

It is a shame, though, that we’ve got some lovely locations to farm in across four continents, but they don’t really get the chance to stand out with the poor draw distance. I’d have liked it to have been a little more polished, but I can’t really complain too much as, in the heat of the moment (yes, there can be heated moments, like when you’re racing to sell your crops before the next day comes around and you face bankruptcy) it’s never an issue.

I’ve still got Farming Simulator installed on my PS4, but after my 15-or so hours with Pure Farming 2018, I think I may be able to free up some hard drive space by making Pure Farming 2018 my go-to farming sim. On consoles, at least – on PC I’ve got three different farming sims on the go, as well as Euro Truck Simulator 2. Now isn’t that sad…

All in all, Pure Farming 2018 does what it set out to do. It’s a refreshing take on the genre that will no doubt give fans of farming hours upon hours of enjoyment. Then there’s the free DLC updates where the developer will hand-pick the best PC mods and release them on consoles as free DLC. Can’t say fairer than that, can you?